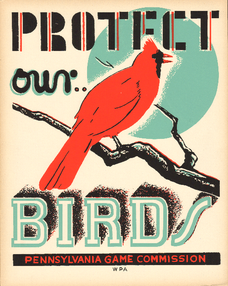 Through their distinct imagery and clear and simple messages, the posters of the WPA provide a unique snapshot of an important era in America’s past. During the depths of the Great Depression, the U.S. government became a vital patron of the arts, employing hundreds of artists to create millions of posters promoting positive social ideals and programs as well as a uniquely American way of life. The resulting designs are a significant historical record of steps taken to help the nation recover from the worst economic collapse in its history.

The story of the these posters is a fascinating journey, capturing the complex goals and objectives of President Franklin Delano Roosevelt’s New Deal reform programs of the 1930s in a collection of beautiful and meaningful pieces of art. The artists’ medium—the poster—is not usually considered a fine art; instead, it has often been disparaged as a mass-produced, “commercial” commodity. Yet the posters are worthy of any celebrated painting or sculpture. In addition to capturing critical social messages, these artworks stand as timeless images of beauty and artistic accomplishment.

THE ARTISTS
By policy, the WPA poster artists were not supposed to sign their work, so we can't always tell who the artist was on any given poster. Here are some of the known artists from the Poster Division. Pulled from Christopher DeNoon's original book on this subject Posters of the WPA. Thanks to Chris' original research, we have more well-rounded stories about these often undocumented image makers. 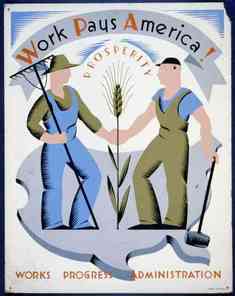 VERA BOCK Born 1905, St. Petersburg, Russia.
At the onset of the Russian Revolution Vera Bock emigrated to the United States with her mother, Russian-born concert pianist, and her father, an American banker. Her art education included trips to Europe, where she studied drawing and painting, and a year's stay in England during which she learned printing, photoengraving, manuscript illuminating, and wood engraving.

In 1922 she began to work as a book illustrator with two children's books, Ella Young's The Tangle-Coated Horse and Waldemer Bonsels' The Adventure of Maya Bee. Throughout her career she illustrated children's books and many of these drawings are housed in the Kerlan Collection of Children's Literature at the University of Minnesota.

Vera Bock's silkscreen posters are notable for their distinctive woodblock-like appearance. Strong, solid forms, often Germanic in influence (front piece), dominate her designs. Her formation in book design and illustration is apparent in her series of posters, History of Civic Services [177-181]. In these designs, numerous human figures share space with well-educated typography, suggesting a quality of wonder often associated with children's books.

She was affiliated with the FAP from 1936 to 1939 as a member of the New York City poster division. During the 1940s she worked as an illustrator at Life and Coronet magazines. She continued to produce book illustration and design including Little Magic Horse (1942), A Ring and A Riddle (1944), and Critical History of Children's Literature (1953). 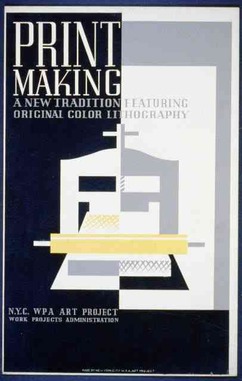 RICHARD FLOETHE Born 1901, Essen Germany.
Floethe was educated in Germany where he studied at the Dortmund Art School, the Munich State School of Art, and the Bauhaus in Weimer.

His own poster designs strongly reflect his training at the Bauhaus, in such elements as the typeface Stencil, designed by Josef Albers, which he often used (283-285). As administrator/art director of the New York City FAP poster division from 1936 to 1939, Floethe was viewed by designers as an encouraging, compassionate figure who provided a working environment to which artists were free to experiment and create.

Richard Floethe spent much of his career as a book illustrator. He has designed or illustrated over fifty books including Ballet Shows (1937), Picture Book of the Earth (1949), and Ting-a-Ling Tales (1955). His designs and illustrations for Tyl Ulenspeigl (1935) and Pinocchio (1938) won the Limited Editions Club Prize. He has also illustrated books written by his wife, Louise Floethe. Among these titles are If I Were Captain (1956) and Winning Colt (1956).

Floethe's work was shown in "The 50 Books of the Year" exhibitions sponsored by the Society of Graphic Arts in 1934 and 1936. His work as a printmaker (woodcuts and serigraphs) is included in the collections of the Metropolitan Museum of Art, the Philadelphia Museum of Art, and the Kerlan Collection of the University of Minnesota. 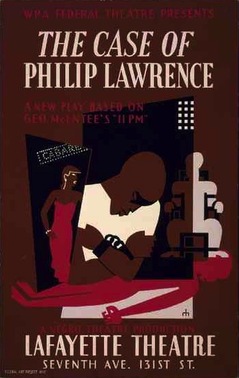 RICHARD HALLS Born 1906, New Orleans, Louisiana; died 1976, Huntington, New York.
Richard Hall's early years were spent traveling through the U.S. and Europe with his father, a sculptor whose commissions included many public monuments. After training at the Cleveland Institute of Art (graduated with honors, 1928), Halls worked with painter and designer Charles Burchfield, 1928-1929.

Halls joined the FAP from 1936 to 1939 where created many posters for the Federal Theatre Project. His designs often contain playful, comic features. After World War II service and studies at the Art Center College of Design, Halls began to work as a freelance illustrator, but a part-time job as an instructor at City College of New York redirected him to a career in education. From 1952 to 1976 Halls taught advertising art and design on the faculty of the State University if New York at Farmingdale. He received his B.A. from Adelphi University in 1961.

Halls' paintings, watercolors, and pochoir (stencil) prints were included in exhibitions at the Cleveland Museum of Art (1934), the Brooklyn Museum (1936), and the American Watercolor Society (1952).
ROBERT M. JONES Born 1913, Goff, Kansas.
Bob Jones created posters for a WPA project far from the mainstream of the commercial art world. He was employed by the State Art Center in Salt Lake City during 1939 and 1940 as poster maker, exhibit designer, and photographer. Jones not only designed materials ton advertise the center but as photographer documented its activities. His photographs and spot illustration are also included in the Federal Writers Project, Utah, A Guide to the State, published.

Jones was educated at the University of Utah and the California School of Fine Art before joining the WPA.

After leaving the Utah FAP in 1940, Jones established his career in New York City where he worked for Life magazine and Columbia Records. He was art director for RCA Records from 1953 to 1973.

Jones' work was included in exhibitions sponsored by the American Institute of Graphic Arts, the New York Art Directors Club, and the Society of Typographic Arts. Over Twenty one-person exhibitions of his work have been in the course of his career.

Bob Jones' art has received more than 200 awards from organizations such as the Society of Illustrators, the Type Directors Club. The American Institute of Graphic Artists and Communication Arts magazines. In addition, Jones has won nineteen nominations and six Grammy's for best album cover from the National Academy of Recording Arts and Sciences.

Jones was an instructor at the Cooper Union School of Art 1951 - 1953 and the University of Connecticut 1972 - 1974. He currently operates a letterpress printing studio, Glad Hand Press, in Stamford, Connecticut. 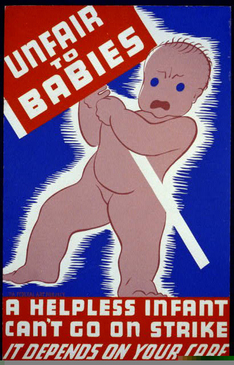 ERIK HANS KRAUSE Born 1899, Halle-Salle, Germany.
Erik Hans Krause began his career in Germany after graduating from the Academy of Decorative Arts and Crafts in Dresden. Following his move to the United States in 1923, Krause worked in New York City. He moved permanently to Rochester, New York in 1932 and beginning in 1936 was employed with the FAP there, supervising ten artists and craftsmen and designing textiles and posters.

Since his years with the WPA, Krause has attained national prominence as a painter of botanical subjects. Exhibitions of his work have been held at the Smithsonian Institution, the National Audubon Society, the United States National Arboretum, and the Rochester Museum and Science Center.

His work has been honored by the American Institute of Graphic Arts and by the University of Rochester with its Fairchild Award in 1938. Krause's illustrations have appeared in National Audubon and National Horticultural magazines. Krause has taught design and illustration at the Rochester Institute of Technology. 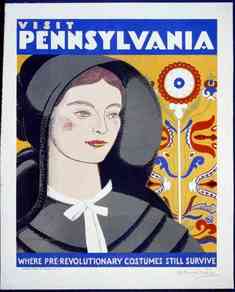 Milhous was educated at the Philadelphia Museum School of Industrial Art and the Pennsylvania Academy of the Fine Arts before joining the FAP. An exhibition of her posters in a FAP gallery attracted the attention of a children's book editor at Charles Scribner's Sons, where she as a staff designer 1944 - 1946, and launched her successful career as an award-winning children's book illustrator.

In 1938 her first book as writer and illustrator, Once Upon a Time, was published. It was followed by other titles including Snow Over Bethlehem (1945), With Bells On (1955), and Through These Arches: The Story of Independence Hall (1964). She received the American Library Association's Caldecott Medal, honoring the most distinguished picture book for children for The Egg Tree (1950).

Milhous was a member of the American Institute of Graphic Arts. Her work was exhibited at the 1939 New York World's Fair and at the Pennsylvania Academy of the Fine Arts. 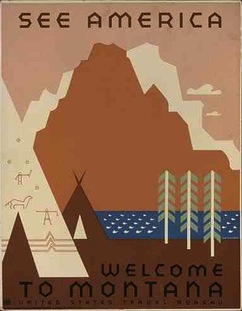 JEROME HENRY ROTH Born 1918, New York, New York.
Jerome Henry Roth (born Rothstein) joined the N.Y.C. poster division after graduating from high school in the Bronx and, at age 16, was the youngest member of the project. While working days for the WPA, Roth attended Art Students' League at night. He also studied at the New School for Social Research and graduated from the Pratt Institute.

Roth was employed by the FAP poster project from 1935 to 1939, when he left to join a New York City advertising agency. After serving in Europe during World War II as a B-15 navigator, he returned to New York in the late 1940s and worked as a graphic assistant to designer Herbert Bayer. In the early 1950s Roth formed his own design studio, which he operated until his retirement in 1983. He has taught at the Fashion Institute of Technology and the College of the City of New York. 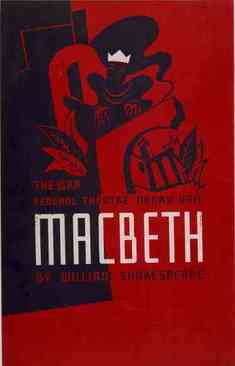 ANTHONY VELONIS Born 1911, New York, New York,
Anthony Velonis introduced the silkscreen process to the WPA poster division in New York City. His pamphlet, Technical Problems of the Artist: Techniques of the Silk Screen Process, published in 1937, allowed other poster projects around the country to utilize this technique.

Velonis graduated from New York University's School of Fine Arts and joined Mayor LaGuardia's poster project in New York City in 1934. In 1935 this project came under federal sponsorship and Velonis remained with the division until 1938. After leaving the poster division, Velonis worked in the FAP graphic art division where he continued to experiment with silkscreening techniques and taught fellow artists about the process.

Velonis' poster designs are marked by cubist-influenced elements and his experiments with printing techniques: split-font applications of paint (312), and applications of tusche crayon directly to the screen.

In 1939 Velonis and Hyman Warsager founded the Creative Printmaking Group and in the late 1940's he started the Ceraglass Company, in industrial silkscreening firm, which pioneered methods of silkscreen printing on glass and plastic containers.

Velonis' art has been exhibited at the Weyhe Gallery, New York City (1940), the Springfield Museum of Fine Arts (1940), the Philadelphia Museum of Art (1971), and the Brooklyn Museum  (1986). His prints are included in the collections of the National Museum of American Art, the Metropolitan Museum of Art, the Australian National Gallery and others. 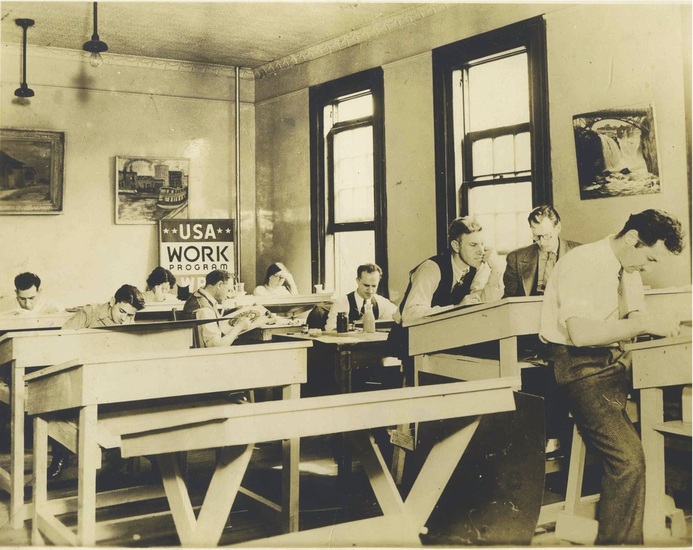 He married Mary Lynch in Dover, New Jersey on September 27, 1930. My memories of my Dad were his ability to draw anything that we talked about and his sense of humor always came through. Both my brother and I treasure his art work that tells the story of who he was. And now our children and grandchildren have his art work prominently displayed in their homes.

When he came out of the service, he worked with his oldest brother Tom painting Esso gas stations. He also had made some displays for the stations. He was employed by the WPA as an artist working out of the Newark, New Jersey studio
where he create posters and other drawings in the 1930’s.

The Library of Congress has the March-April 1936 Progress Magazine issued by the Works Progress Administration of Delaware. My Dad drew the original picture on the cover. My mother posed for the picture of the woman in the drawing which makes it even more meaningful. I was able to see it in the Library of Congress Reading Room which was an “Aha” moment for me.

We are excited about having my Dad’s work celebrated in Posters for the People and happy to share it with others.